Hope For The Broken Children 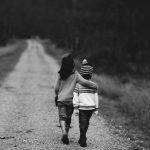 I laid down, completely exhausted last night. I felt as if I’d pass out as soon as my head hit the pillow. As I closed my eyes to doze off, my mind immediately raced to a memory from my childhood. I was huddled under the table looking out into the kitchen. It was like a flash of a picture but my mind recognized exactly where it came from. Suddenly, my exhaustion faded and I was wide awake.

It had been a long while since I had trailed down the memory paths of that time in my life. As the trauma replayed in my mind, it was as if I was watching an old familiar movie scene. I had seen it many times before but it was no less shocking. I stared at the dark ceiling in disbelief about the occurrences of my childhood. As an adult, I’m now so far removed from it that it almost seems like one of those re-occurring nightmares. But it was real and it really did happen.

Days of the Week

I was 10 when the bruises first appeared on my Mother. I had spent the weekend with my Dad, and when he dropped me off at home she was standing in the doorway to greet me.

Never had I seen such a terrible black eye. I asked her what happened. “I fell last night and hit these bricks. You know how clumsy I am.” she said as she pointed to the bricks lining our over grown flower bed. I wasn’t sure if she was telling the truth but didn’t know what else would have happened so I ignored my suspicion. I walked down the hall to my room as she followed me and sat on my bed. As I sat down beside her, I saw the others. More bruises covered her arms. In an instant I knew my suspicions were right. “

Did he do this?” I asked. “Yes, but it won’t happen again.” I don’t even think she believed her own words. It did happen again.From that moment, I began to keep track in my mind which day of the week it was when the abusive fights happened.

Eventually, every day of the week would be tainted by memories of their fights.

I declared to myself there were no good days left–no days that were free of pain. I became afraid to come home, fearing what I may see next.

Most of their fights are broken up in my mind as little clips. I don’t remember every single detail but only key fragments that stuck with me over the years.

But burned into my brain are the details of the first time I witnessed the scary scene.

It wasn’t out of the ordinary for my brother and I to be alone at night. Sometimes, my Mom and her fiance’ wouldn’t get home until early morning hours. Many times, my brother was out running the streets.

I had put myself to bed that night. I awoke around 3am to yelling in the living room. It wasn’t long before I recognized their voices. I stayed in my bunk bed, unsure of what to do and hoping they would stop. My view of their bedroom door allowed me to witness my Mom run into her room as he followed, closing the door behind him.

For the next few minutes, I heard my Mom scream. I tucked my ears into my covers and shut my eyes. Then I heard her yell, “Brittany, call the cops!” I trembled as I climbed down from my top bunk and slowly walked to their door. It was locked. I began my search for the phone.

I looked everywhere–under the couch cushions, in the laundry room, by the computer. It was no where to be found. As I was digging in the couch, Scott’s voice startled me from above. “Don’t call the cops, Brittany. Do you want your Mom to go to jail? That’s what will happen.” Manipulated by his half-truth, I gave up. Later, it was revealed that he had hidden the phone.

I realized I hadn’t heard my Mother in a couple minutes. Did he leave her back there for dead? Did he kill my Mom? I loved him like he was my Dad. How could he do this?

My Mom is feisty. She does not give up a fight. She stumbled out of their bedroom and headed toward him with fire in her eyes. Unfortunately, he was stronger than her.

I stood in the middle of our front room, watching him grab her and throw her over the back of the recliner, causing it to fall over. As he stood on top of her, he punched my Mother over and over and over and over again. I felt my knees hit the ground as I screamed at the top of my lungs, “Stop!!! Please STOP!”

Out of the corner of my eye, I saw my childhood dog and my cat cowering under the kitchen table with fear in their eyes. I crawled under there with them and told them it would be okay. They cuddled up to me–the only comfort I received that night. All 3 of us remained there until the cops finally busted through the doors. Our neighbors had heard the commotion, thank God.

Two men and a woman.

My mother fought the two men as they took her to the car. Ingrained in my mind are her screams while they took her outside, “Brittany, call your Dad! Call your Dad Brittany!” My Dad hadn’t picked me up for visits in a while. I had begun to give up hope that he would ever want to spend time with me again. But in that moment, my Mom showed she was worried for me. She wanted to make sure I had somewhere to go. I’m thankful that even in the midst of the trauma she just experienced she still cared for her daughter.

The female cop talked to my Mom’s fiance’, who was much more experienced at dealing with police. He was always polite and kind to them. He helped her find my Father’s phone number. As he searched, I’ll never forget what he said to me. “I’m sorry Brittany. This wouldn’t happen if your Mom didn’t make me so mad.”

Little did I know, years later I would hear the same thing from my boyfriend. “Brittany, I wouldn’t be like this but you just make me so mad.” Manipulation and blame shifting in it’s most raw form.

The other police officers took him to jail too and the woman waited with me until my Father arrived.

I don’t remember much of the ride to his house–just the shock of it all setting in. Only years before, my parents were still married and our family was still intact. How could so much change in so little time? Sin. That’s how.

When I walked into his home with his new family, I couldn’t help but notice the neatly organized kitchen, the new furniture rightly in its place and the walls free of holes. A stark contrast to the home I had just left. He showed me the room I would sleep in and went to bed. I pulled back the sheets of that neatly made bed and wondered if I was too filthy to sleep in it. I laid my head down upon the fresh pillow anyway and began to weep. The pain I felt was almost unbearable, and I wanted so badly for someone to hold me and tell me it would be okay. But I soaked that pillow with the tears of a broken child, alone in a perfect little room that wasn’t hers.

He Hears Their Cries

And even now, there are broken children crying alone, grasping their pillows. Some of them have not been spared of the beatings. Some of them live in fear as I did. And they long to be held and comforted. They reach out but feel like no one is there. But God sees them and he hears their cries. He knows and feels their pain with intensity no human ever could. I wish someone would have told me this. Which is why I’m writing this today. Because these children need to know that there’s a God who weeps for them. That he loves them and is holding on to them.

“The LORD is near to the brokenhearted and saves the crushed in spirit.” (Psalm 34:18 ESV)

There is sin in this world and abuse and broken families are a result of it. I can’t answer the question of why God allows pain in our lives but I can say he promises to use all things for his children’s good and his glory. Turn to him, he is our only hope.

I am living, breathing proof that the Lord can heal broken children. He has healed my heart and shown me there was purpose in my pain. He uses every single thing we go through and turns it for good. Nothing is wasted. Sometimes we get to see the fruit of it and other times we have to trust that regardless of whether or not our “whys” are answered, the truth remains that he is good.

One day we will see the full fruition of his plans and all our whys will be answered. I have no doubt that in that moment we will stand in amazement knowing he was always faithful.

“He heals the brokenhearted And binds up their wounds.” (Psalm 147:3 ESV)

“And we know that for those who love God all things work together for good, for those who are called according to his purpose.” (Romans 8:28 ESV)

A Prayer for the Broken

“Father, oh how it hurts me that there are so many families going through the very same hardships I did. My heart longs for them to be healed. I know you are the only one who holds the power to heal them. I pray you’d work in the hearts of abusers and cause them to fall upon their knees in repentance. I pray you’d break the chains of their anger and give them new life in you. I pray for the abused that they would turn to you as their help and that you’d save them physically from their abuser but also spiritually from their sin. I pray they’d find hope in you. I pray that you would protect children in these families, Lord. They need to know you are holding them. May they find comfort in you. I pray you’d protect their hearts from bitterness, hatred, manipulation and following in the footsteps of the abused or the abusers. I pray you’d save them and lead them down the path everlasting. I pray you’d show them that you are good, even in tragic circumstances and you have a purpose for their pain. God, please heal these families and make them into followers of you, for your namesake. To the God who loves us more deeply than we could ever imagine, in Jesus’ name. Amen.”