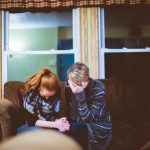 Out of all of the articles I’ve written, one has stuck out as most popular by a landslide. People think lust is prominently a man’s problem, but my blog analytics would beg to differ. In this article, I shared how I battled lust, and the amount of clicks reveal how big of an issue lust truly is for women in the Church.

They are looking for answers to their struggle, and while they search, 90% of us turn a blind eye rather than offering a helping hand.

We all have sinned sexually in some manner, whether it be in our mind or with our bodies. But I’ve known very few women who have been transparent about it.

I have, however, been in a room full of women while a dear sister shared her struggle. And out of all of the ladies gathered, only one spoke up to help her step out of isolation and into healing.

The Church Needs Openness in the Battle

We need to be more transparent about sin, during the battle and after, for the sake of healing and restoration.

Women struggling with lust need to be open with other godly women they’re close to. This is not something to fight on your own. You need help, and the Lord has given you the Body of Christ for this very purpose.

If you want to have victory, you must step into the light.

“Therefore, confess your sins to one another and pray for one another, that you may be healed.” (James 5:16 ESV)

Confession sheds light on a dark situation and there is much healing in bringing sin to the surface. The grip of sin loosens when a believer refuses to keep silent in their struggle.

The Church Needs Openness After the Battle

Oftentimes, what keeps women entangled in lust, is that they feel alone in their sin. Maybe the lie Satan is whispering in their ear is true: they are way more wicked than the women around them. And only they have a heart bent toward lust.

What a disheartening and absolutely paralyzing thought! I have felt this way and I’m betting many of you have too. That’s because the topic is rarely on the table in most Christian circles.

But it’s the secret struggles against sin that plant the seeds which can ruin a church.

Men and women are too afraid to seek counsel about that first thought of someone other than their spouse or their ongoing addiction to pornography. And this fear leads them down the treacherous pathway of more sin, more addiction, a heavier weight of shame and ultimately, spiritual death (James 1:15).

What if there was a culture of honesty regarding lust and sexual sin? What if Christian women had paved the way before them in transparency and hope, showing them the way out of the darkness?

What if we were less concerned about what people may think about us and more concerned with the spiritual well being of our dear sisters in Christ?

Brothers, if anyone is caught in any transgression, you who are spiritual should restore him in a spirit of gentleness. Keep watch on yourself, lest you too be tempted. Bear one another’s burdens, and so fulfill the law of Christ. For if anyone thinks he is something, when he is nothing, he deceives himself. (Galatians 6:1-3 ESV)

My brothers, if anyone among you wanders from the truth and someone brings him back, let him know that whoever brings back a sinner from his wandering will save his soul from death and will cover a multitude of sins. (James 5:19-20 ESV)

What I’m asking of women in the Body of Christ is this:

Let’s stand up for our sisters in Christ by bearing their burdens, even the burdens we’ve previously put to death in our own lives. The Church needs women who are open about lust.