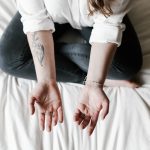 True freedom from sin only comes from genuine faith in Jesus. (Romans 6). Until God saves us, we cannot choose anything other than sin. We are dead in our trespasses, following Satan and his treacherous ways. (Ephesians 2:1-5).

The born again believer, though, has a choice. We can decide who we will serve in every moment…God or our fleshly desires?

We know that our old self was crucified with him in order that the body of sin might be brought to nothing, so that we would no longer be enslaved to sin…So you also must consider yourselves dead to sin and alive to God in Christ Jesus. Let not sin therefore reign in your mortal body, to make you obey its passions. Do not present your members to sin as instruments for unrighteousness, but present yourselves to God as those who have been brought from death to life, and your members to God as instruments for righteousness. For sin will have no dominion over you, since you are not under law but under grace. (Romans 6:6; 11-14 ESV)

When confronted with sin, the believer chooses either Christ or sin as their Master. We either enslave ourselves to the law of liberty or the law of sin. (James 1:25). One sets free; the other destroys.

For freedom Christ has set us free; stand firm therefore, and do not submit again to a yoke of slavery. (Galatians 5:1 ESV)

Praise the Lord that through Christ freedom is possible for us! What a beautiful truth!

But if this is true, why are so many Christians still enslaved to sin? Why do we continue to toil with fear, sexual immorality, anger and the like?

Because we aren’t fighting.

Many people remain in bondage simply because they want freedom to be placed on them rather than fighting for it.

And I get it. I’ve been there. The battle is hard, and often it feels like an exhausting, uphill with no water battle. We think it’s impossible because somehow, we’ve convinced ourselves that it should be easy. Friends, if Jesus, the Son of God, had to face temptation and learn how to squash it, who are we, mere sinful humans, to think we should be exempt from the battle against sin?

Jesus has won! He has freed us! But we are still living in a sinful world that lures us in at every corner with it’s winks and crooked smiles. And until we are raised on the last day, our fleshly desires rage inside of us. (Galatians 5:17).

We have to walk in the victory that Jesus has already won.

Our Lord never promised to take away our struggle with sin this side of eternity. But he has given us a choice and promised to equip us for the battle. We need only to take up our armor and fight. (Read Ephesians 6:10-20)

READ: How I Battled Lust as a Single Woman

Do You Really Want to be Free?

Are you in bondage to a sin in your life? What is that thing you hide from everyone and have convinced yourself is okay to do because it isn’t hurting anyone? Or maybe you’ve justified it somehow.

Bitterness, sexual sin, addiction, whatever it is…do you truly want to be freed from it? If your answer is yes, why do you want freedom? Do you see that each and every sin offends a holy God, or do you just want to be free from the consequences? Do you mourn your sin against your loving Father, or do you mourn because of the way it makes you feel?

In my battle with anxiety, I have often longed for freedom from the pain and panic, but rarely given a thought to my sinful distrust in God.

READ: What If We’re Wrong About Anxiety?

There’s no freedom from sin without trusting in the victory Christ has won on your behalf. Without repentance, our armor remains untouched on the ground and our hearts are wide open for attack.

If you truly desire to walk in freedom, you must view sin rightly and put on your armor.

Friends, the promises sprinkled throughout the new testament speak of a new life and a newfound freedom in Christ. These aren’t lies. You don’t have to live as though the sin you face is forever attached to your back. You can, by God’s power, throw it off and put on your armor to fight.

So get up and walk in the victory of the cross.