Feminism Doesn’t Love You Back 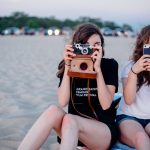 It seems feminism is the new religion of America. Many young Christian women can be found saying, “I love feminism!”

I have to wonder though, does feminism love them back?

Modern day feminism is no longer just about gaining women’s rights. Today’s feminist can be seen applauding other women who kill their baby within the womb and circumventing God’s plan for marriage and sex.

The many voices of feminism scream, “Equality!”…unless you believe differently than them. Sure, they encourage you to follow your dreams…unless you aspire to be a stay at home wife or mom. Then you’re just a “waste of potential.” They yell, “Women’s rights!”…unless, of course, you’re a baby girl in the womb.

Feminism claims to love and support women, but when you dig a bit deeper, you find that to be far from the truth.

Recently, with my friend’s wedding on the way, I traveled store to store in search of a dress.

As I ventured toward the dressing room, past the pretty pieces in the front of one store, I was met with bizarre clothing in the back. I glanced at skimpy clothes and crop tops that said, “Girls do it better” and “Feminism”

This section, geared toward teen girls like the ones I lead in the youth group, strategically feed lies straight from the lips of feminism.

LIE: If you’re not one of us, you’re a disgrace to women.
LIE: Revealing your body is power.
LIE: Men are beneath you.

These lies, among others, are reiterated in magazines, TV series, and perfume ads. They’re easily pointed out in songs and high school cafeteria conversations.

And they’re seeping into the minds of so many women.

Once I made it to the dressing room, I was met by a male employee. (In a women’s store, mind you.) Awkwardly, I asked if I could try something on and he assured me all of the rooms were open.

Cool. Thanks…but can you leave?

Society, driven by the modern day feminist agenda, has told men that simply because of their sexual orientation or decision to act like a woman, they now have the right to be where women like you and I take our clothes off, despite their biological makeup.

You see, feminism tells you that you have such little uniqueness and worth as a woman, that any man off the street can put on a dress, paint his face and be declared female.

And feminists celebrate it. Yet, all it proves is how illogical their view is. “Women run the world! But don’t worry, you can easily buy a bra and become one of us!” Is it really so simple to transform into a woman?

No. I refuse to believe the lies.

God created men and women to be equal but with separate roles. (Genesis 1:27; Genesis 2:18-25; Ephesians 5:22-33). He made us with different bodies and clear genders. He set up protection for women and gave us gifts which differ from men. And everything he did, he did because he knows what’s best for his creation and his glory.

But many women would like to reject this fundamental truth. If men are busy playing dress up, women can step into the roles that need to be filled. They can take the lead like their heart is so bent to do, ever since the tragic day when Eve took the fruit.

Unfortunately, embracing anything other than God’s truth and grasping at the roles of men only leads to destruction.

Answer me this: where is feminism when the emotions and shame of abortion hit? Where is she when your baby is stillborn? Or when you lose a child through miscarriage?

Feminism tells you to suck it up. After all, it’s just a clump of cells. It wasn’t a life and therefore means nothing, right? Why would you hurt so badly? Why would grief overtake you? You have no right to mourn–no reason to weep.

And yet, you feel the ache. Because you know feminism is lying to you. Your body knows that life was stripped away from your womb, and so do you.

Where is feminism when your marriage is in shambles or when friends forsake you?

Most importantly, where will she be on the day when you stand accountable before the God who made you, and realize you have no relationship with him, and no advocate before the throne.

Feminism lacks truth, and therefore lacks the ability to give any sort of real hope in the painful circumstances of life.

Feminism causes women to suppress real, raw pain and put on a smile as if everything is okay. She leaves you destitute and alone.

Feminism is a Cruel Master

Women daily sacrifice their marriages, relationship with God and even their children on the altar of feminism.

Tell me, when was the last time feminism sacrificed anything for you? Has she ever sent her only son to die the horrific death you deserved and free you from the bondage of sin?

No. Only God has done that. And though we’ve all spurned his name and rejected his will, he stands ready to save those who will turn to him.

Surely he has borne our griefs
and carried our sorrows;
yet we esteemed him stricken,
smitten by God, and afflicted.
But he was pierced for our transgressions;
he was crushed for our iniquities;
upon him was the chastisement that brought us peace,
and with his wounds we are healed.
All we like sheep have gone astray;
we have turned—every one—to his own way;
and the LORD has laid on him
the iniquity of us all. (Isaiah 53:4-6 ESV)

Satan whispers to us, as he did to Eve, saying, “You can be God.” And rapidly, as each woman gives in to his temptation, we see how he uses us to flip upside down the order God set up. There’s a reason he went to the woman, friends.

But we don’t have to listen. We can choose to trust our Creator, our loving Father, instead. We can live in free obedience to him, knowing that his boundaries and roles are not set in place in order to withhold good from us, but to protect us from lives of brokenness, apart from his loving care.

Feminism is a cruel master. She’s out to wreck the lives of women and destroy their souls.

Jesus died to save women (and men) and free their souls. He has given all of himself, even his very life for those who will turn to him for salvation.

Jesus is better than feminism.

Feminism doesn’t love you back.