Mother’s Day is the Hardest 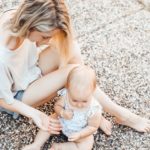 It seems, even before the first sprout sprang from the ground, indicating spring is near, my heart had already begun to dread what follows April showers. It’s not those beautiful flowers which May typically brings, nor is it the warmer weather I fear.

The day where churches worldwide will honor the visible mommas, the ones whose arms or wombs are filled. Many times, forgetting those whose wombs remain empty as they long for children they’ve either yet to receive, or have lost.

Before continuing, I want to state clearly that I truly believe mothers should be honored both on Mother’s Day and all other days. But as we celebrate the observable moms in our life, may we also reach out to the invisible ones and the childless women among us.

It was on this holiday that I first saw the faint line on a pregnancy test, so faint I dismissed it until testing again four days later. I held evidence of my motherhood in the palm of my hand and felt the symptoms of life flourishing in my womb. But in mid-June, our first baby was delivered into Heaven and my motherhood was stripped from within. Just months later, I would miscarry again. An ultrasound picture, pregnancy test, and the hormonal line on my lower abdomen are the only remaining evidences of my motherhood.

As I write this, my womb remains barren. But I am a mom.

And whether you’ve lost babies through miscarriage, stillbirth, or infant loss, you’re a mom, too. The world around you, and even some of those closest to you, may not acknowledge it, but you can be sure God does. Through the babies we’ve lost, he has made us mothers, regardless of whether or not we have been gifted the ability to live out our parenthood.

You are not invisible to God. Your grief, your longing, your fight to rejoice with those around you, your motherhood, is all seen by your loving Father. He knows what it’s like to lose a child, and just like Jesus and the Father, we will one day be reunited with our children at the resurrection.

A Baby Won’t Fix it

Up until recently, I was believing a lie. I found myself eager to become pregnant before Mother’s Day in order to avoid the pain of facing it empty handed. But as I pondered the very possible reality, I realized a baby will not erase my grief on that day. Regardless of whether or not there’s new life blooming in my womb, I will still suffer the pain of the loss of our two babies.

In all honesty, yes, it would make it a bit easier to face a church bursting with children and pregnant women if I too were pregnant. But it wouldn’t save me from the heartache of the last year.

We must approach Mother’s Day with our mind fixed on this truth: Only God can mend our hearts. Let us place our hope in him alone.

He heals the brokenhearted and binds up their wounds. (Psalm 147:3 ESV)

The Fight of a Lifetime

Mother’s Day is a war zone for the “invisible mom” and childless woman. You can bet the enemy will do anything in his power to cause you to doubt God’s goodness. He will use friends and family who forget you, pastors who ask moms to stand, sermons on motherhood, words that could cut bones in two, striving to draw out bitterness from your heart.

He will accuse you.
He’ll torment you.
He’ll tempt you.
He will seek to destroy you through these things.

Don’t allow him to have victory. On Mother’s Day, we must take up our armor, immerse ourselves in the knowledge of God’s sovereignty and love for us, and fight.

Feel the sorrow and grieve your losses, but fight against bitterness, anger, and resentment.

It will be hard. Tears will be shed and sorrow will be felt. But let us strive to encourage others on Mother’s Day. Rather than focusing on our own pain, let’s do the hard work of rejoicing with the women around us. God will give us the strength we need to glorify him in this way.

May we also have eyes willing and ready to see the longing and grieving sisters sitting in the pews near us. Here are some people to be watchful for:

I guarantee you’ll find someone in your church who fits into one of these categories. Be intentional to reach out to them, write them a card or give them a small gift to acknowledge their grief.

I would be lying if I said I no longer dread Mother’s Day. I know the sinfulness of which my heart is capable and I fear the pain. But I’m striving to glorify God in my suffering and praying he would provide strength and grace to do just that on this upcoming holiday.

Mother’s Day is the hardest, but with Jesus we can face it with hope.