Beware the Draw of Laziness in the Midst of Suffering 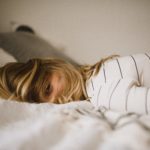 There’s a permanent indentation in my couch. The toll of first-trimester exhaustion from two pregnancies, as well as the miscarriages that ended them, has made its mark on our lives. That once new couch is just one evidence of it.

It’s been there from the beginning, delivered with it’s appalling “new furniture smell” as I fought off morning sickness. But as my nausea faded, along with the little life inside my womb, my body sunk deep into the fleeting comfort it provided. It comforted for a time, but as all false refuges do, it left me unsatisfied.

A Time to Mourn

When sorrow swoops down like a hawk in hunting, stealing our health, taking our loved ones, and breaking our hearts, we must weep for what was lost and mourn what will never be. For a time, this may mean simply making it through the day and fighting for joy in the Lord through tears. Grief is tricky. It can be overwhelming. We must allow ourselves to grieve, but we mustn’t give into the temptation to become an inactive disciple. Weep in your bed when you need to, but just as there’s a time to mourn, there remains a time to get back on our feet and press on toward the goal (Phil. 3:14).

Don’t give Satan any leeway in your life. A lack of self discipline always bleeds into other areas. Sin gives birth to more sin and eventually leads to death (James 1:15).

The Slippery Slope of Laziness

After losing our second unborn child in a matter of 5 months, the overwhelming grief of our reality made it hard to do anything. For years, I had immersed myself in deep study of the Bible, but now my brain felt incapable of such a thing. Praying for others was easy, but I had no strength within me to offer up prayers for myself. Even the tiniest house chore felt daunting to me.

This is often times a natural response to grief. But the line between where grief becomes laziness is the slickest of slopes.

You see, it’s easier to sleep in later than you should rather than facing hard circumstances. It’s easier to scroll through social media first thing in the morning instead of doing the hard work of pouring over the scriptures. Drifting away in the story lines of our favorite show is certainly easier than doing dishes. It’s easier, but it’s not Christlike.

Months after our second miscarriage, I found myself entangled by laziness, doing the bare minimum in most areas of life and angry at myself for allowing my life to take that form. In my grief, I had offered my flesh victory. We must be on guard against laziness, especially in the midst of suffering.

As I ponder the example of Jesus’ life and death, I’m struck by this truth: it wasn’t his Deity that allowed him to resist temptation, but the Holy Spirit working inside of him. This causes us to lay aside the lie that Jesus was able to resist simply because he is God, which tempts us to exclude ourselves from the same obedience.

When Satan tempted Jesus to fulfill his desire for food as he fasted in the wilderness, it was the Spirit who empowered him to withstand (Matt. 4:1-11). When Jesus fell to his knees, begging for the cup to pass from him, yet submitting to the Father’s will, it was the Spirit who strengthened him (Matt. 26:36-46). As he was mocked, beaten and tested, the Spirit aided him to remain silent before his accusers (Mark 14:53-65). The Holy Spirit empowered the Lamb, who was slain for us, to endure the most severe suffering known to man (Matt. 27:32-56).

Surely, it is that same Spirit who empowers the believer to endure suffering and fight the temptation to let laziness rule our lives. Jesus is our example. He suffered well, with his mind set on the joy that was before him.

By the power of the Holy Spirit, may we follow his lead.

Therefore, since we are surrounded by so great a cloud of witnesses, let us also lay aside every weight, and sin which clings so closely, and let us run with endurance the race that is set before us, looking to Jesus, the founder and perfecter of our faith, who for the joy that was set before him endured the cross, despising the shame, and is seated at the right hand of the throne of God. (Heb. 12:1-2 ESV)