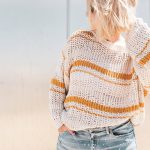 Our hips don’t lie. They tell the story of brokenness which entered the world at the first bite of the forbidden fruit. I see it in my own heart. I see it in the hearts of single women, married women, Christian and non-Christian. Some dress to get the attention of particular men. Some of us get angry when our husband doesn’t praise our beauty as we want.

Let’s STOP. Let’s serve the true God. Let’s clothe ourselves with Christ. It’s not just about self-respect or teaching our daughters to respect themselves, it’s about turning from our idolatry and teaching our daughters that there’s more to life than being viewed as “sexy.” Our lives have a much deeper purpose and a weightier worth in Jesus. We teach them, and remind ourselves, that Jesus is better—that he’s the most wonderful treasure to behold.

I’d love for women to forgo their acts of degradation out of respect for their inherent worth as image-bearers. But more than that, I’d love for all of us to treasure Christ so much that the thought of placing anything or anyone before him seems impossible.

I have a heart for women who degrade themselves because I once was one of them. But praise the Lord for his grace! He offers it to anyone who runs to him as a refuge from sin. So run.