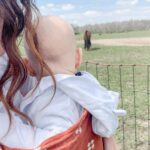 Maybe it’s because I missed this with my other babies. I know it’s partially that I fear I’ll never experience it again. I want to freeze time, take it all in, but life is moving too fast. While many around me have arms stretched toward what’s next, I’ve got a death grip on this season, grieved at the thought of closing its chapter. It’s possible I’ve set myself up for failure in motherhood by assuming I won’t enjoy the stages to come. As if I’ll just stop finding deep joy in watching my child learn and grow when the clock strikes midnight. What kind of logic is that?

I recall standing in my kitchen a few years back, fearing I’d hate being a mom. Huddled over the dishes in the sink, I prayed for the Lord to change me—to give me a desire to raise little ones. The desire that came naturally to most Christian women, but I seemed to lack. His obvious “Yes.” to my prayer is not lost on me. Truly, I feel a deep satisfaction in being my little boy’s mama. It’s the job I never knew I’d love—a testament to how God can change a heart.

I realize part of my clinging comes from my running. I’m afraid. Soon, we will step into a new version of hard. One where my days will be filled with witnessing the curse of Genesis in my child, disciplining him, and seeing my own wickedness in response to his. The messiness of life will increase, not just in the form of dirty diapers and taking care of a sick child, not just in a disorderly home or a messy face to wipe, but the mess in my heart. What if I hurt him with my sin? What if I don’t model repentance and faith in Jesus to him well enough? What if I fail to comfort him as a mother should? What if I fail him, Lord?

I know that’s what Jesus would say to me. I will fail. That’s the point.

And when I fail, I’m covered in the righteousness of Christ and my shame has already been borne by him on the cross. Praise the Lord! I’m taking these fears and my neediness to the throne of grace, knowing Jesus meets me there, giving mercy in my time of need.

I repent that in my clinging to this wonderful season, I’ve displayed a different kind of discontentment. Instead of wishing for the future, I’ve sought to avoid it. With my back against the longhand, I’ve tried to slow the clock down rather than trusting the God who made time. I’ve wasted many moments fearing presumed hardness and I’ve quickly forgotten how God can do a miraculous work in my heart.

In our season of loss and grief I learned to savor the good around me even as I hoped for a child. I stood open-handed to the Lord and trusted his plans were best. I’m learning now, that savoring looks like rejoicing in our baby boy while keeping my palms to the sky, trusting God with how quickly this season passes.

So I’ll love on my baby, giving him all the kisses I can and taking in every moment of his sweet smile. But I’m releasing my grip. I’m embracing what God has for me now and what he has for me tomorrow. I’m trusting that he will finish the work he started in me. Because his promises are true.