Bow Before the Omnipotent God 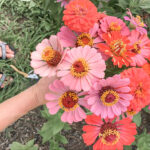 A couple of years ago I bought a bag of zinnia seed mix for dummies on a whim. You just sprinkle it on the soil, water, and watch. Within a few weeks, my own cut-flower garden emerged, full of bright oranges, pinks, and reds. Excited by the results, I decided I’d buy the same mix the next spring. I followed the instructions and waited…and waited…and waited. Nothing. Not a single sprout from the ground. “What’s summer without zinnias?” I said to a friend. So I tried again. Nope. Still not right. Frustrated, I bought a packet of seeds and tossed them on the flower(less) bed and prayed for at least a few blooms.

I did get a few beauties to behold in my flower garden that year, but I imagine I’d have gotten many more if I could speak them into existence like God created the world by the power of his word. Despite what certain theological camps claim, that’s an ability that belongs only to him. Because he alone is omnipotent.

Omnipotence is a fancy way of describing God as being “all-powerful”, meaning he possesses all power and has the absolute authority to do as he pleases. He has the authority because he’s the Creator and all power belongs to him. “Our God is in the heavens” and doesn’t just have the authority to do “what he pleases”, but also the eternal power to carry it through (Psalm 115:3; Romans 1:20).

Creation declares the glory and power of God. He spoke everything into existence. Can you imagine having power like this?

“By the word of the LORD the heavens were made, and by the breath of his mouth all their host. He gathers the waters of the sea as a heap; he puts the deeps in storehouses. Let all the earth fear the LORD; let all the inhabitants of the world stand in awe of him! For he spoke, and it came to be; he commanded, and it stood firm.” (Psalm 33:6-9 ESV)

My husband and I are currently engrossed in a gripping documentary on Netflix about the Second World War. We noticed a common theme of weather turning in the favor of the allies in their fight against Japan, France, and Hitler’s Germany. It’s not lost on us that God is sovereign over these shifts. His power is clear as day (pun intended) as we watch battles swayed in the direction God wants by cloudy skies turned blue and green hills suddenly covered in snow.

Echoing the apostles we might ask “Who then is this, that even the wind and the sea obey him?” (Mark 4:41). It is Jesus. Let us stand in awe of him as the Psalmist declared in Psalm 33. He is worthy and his power should be revered.

The Power to Sustain

I’ve yet to reach a point in life where my mind is not blown by the truth that God is actively sustaining the earth and everything in it. As my fingers peck the keys on my laptop, he is, by the power of his word, holding my very being together. My organs are functioning well and my heart is beating. I’m alive, because he has kept me so. But way more astonishing than my little life is the truth that he upholds the whole universe.

He is the radiance of the glory of God and the exact imprint of his nature, and he upholds the universe by the word of his power. (Hebrews 1:3a ESV)

Colossians 1:16-17 tells us that not only did Jesus create everything, but also, “in him all things hold together.”

Part of my job as a stay at home mom is to keep the tiny human living in my house alive. I keep him from going face-first into the open bathtub or slamming his face into the concrete porch steps or chewing on cords. I’m careful he doesn’t come in contact with one of his food allergens and always keep his EpiPen nearby. Yet, I’m keenly aware that I have little control over his life. I’m but a steward of even the small amount of control I do have. I fight hard to keep my son safe, but only God is the One who sustains his life.

Name Above All Names

Julius Caesar, Constantine the Great, Queen Elizabeth I, George Washington, Joseph Stalin, and the dreaded Adolf Hitler were some of the most famous and powerful leaders in history. Yet, not one name stands close to the King of kings. God is greater than all and his name is the name above all names (Philippians 2:9). All things are under his feet.

“…far above all rule and authority and power and dominion, and above every name that is named, not only in this age but also in the one to come. And he put all things under his feet and gave him as head over all things to the church, which is his body, the fullness of him who fills all in all.” (Ephesians 1:21-23 ESV)

He rules over life, death, and everything in between. He’s not just all-powerful, he’s most powerful. He’s not only powerful today but is eternally powerful.

By this power, God raised Jesus from the dead. And by the very same power, he works in the hearts of spiritually dead sinners and turns them into saints, alive in Christ.

That any human places their faith in Jesus for salvation is a miracle as unbelievable as when Jesus raised Lazarus from the dead (John 11:38-34). Or when the breath of life was ushered into dry bones (Ezekial 37). We were dead in our sin just like those bones, unable to put forth any effort to save ourselves—to make ourselves alive (Ephesians 2:1-10). But God is mighty to save! He drew us out of our pit of destruction and placed us safe on the Solid Rock (Psalm 40:2).

He did so by his great power…

“…and what is the immeasurable greatness of his power toward us who believe, according to the working of his great might that he worked in Christ when he raised him from the dead and seated him at his right hand in the heavenly places…” (Ephesians 1:19-20 ESV)

Truly, the greatness of his power is immeasurable. Do you believe it?

Friend, if you haven’t turned away from your sin and turned to Jesus for salvation, I pray that by his power, today would be the day of salvation for you. The God who is above all and has authority over all is worthy of your praise and one day every knee will bow before him (Romans 14:11). I pray you’d bow before him today while salvation is offered to you. Seek him while he’s still near (Isaiah 55:6 ESV). He’s ready and willing to save you. And his power will make you a new creation, just as he spoke life into the void in the beginning.