Turn Over the Tables in my Heart, Lord 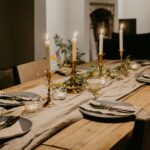 What’s on your dining table right now? Is it hidden under all kinds of random stuff like mine is? Our dining table often becomes a catch-all table. At dinner, my poor husband tries to eat without knocking over the boxes with his elbow. My son launches his food, hitting the papers in the middle. Bills go missing under the jacket and where on earth did my pen go? This table is made for feasting, but often it’s too cluttered for its intended use.

Our hearts are often like my table—made to feast on the Lord, yet cluttered with sin. God created us to worship him, but we pile on the tables of our hearts things like envy, bitterness, unforgiveness, lust, greed. We ignore them, trying to pretend they aren’t there because dealing with them seems too overwhelming. Within our bodies resides the Holy Spirit, and yet we forget our bodies are his temple (1 Corinthians 6:19-20).

This reminds me of another temple. In John 2:13-17, Jesus is appalled at the state of his Father’s house, the temple in Jerusalem.

The Passover of the Jews was at hand, and Jesus went up to Jerusalem. In the temple he found those who were selling oxen and sheep and pigeons, and the money-changers sitting there. And making a whip of cords, he drove them all out of the temple, with the sheep and oxen. And he poured out the coins of the money-changers and overturned their tables. And he told those who sold the pigeons, “Take these things away; do not make my Father’s house a house of trade.” His disciples remembered that it was written, “Zeal for your house will consume me.”

There were probably a few things going on here that angered our Lord. The fact that they were selling animals for sacrifice in the temple probably meant many people didn’t fully grasp the gravity of the Passover. While it may have been difficult for Jews who lived further from Jerusalem to travel with an animal for sacrifice, surely there were some who with little effort or thought, came to the temple, bought an animal, made their sacrifice, and went on with their day. The specific place these animals were sold was in the “Court of the Gentiles.” An area meant for non-Jews to pray, rendered useless by greed. Furthermore, money-changers were most likely unfairly profiting off of God’s people, particularly those who were poor. Greed, pride, laziness, thievery, injustice, and a clear irreverence for a holy God filled the temple that day. And Jesus Christ, the Son of God, was zealous for God’s glory.

The Jews asked him for a sign of his authority to throw out the money-changers, but instead of granting their hardened hearts an immediate sign, Jesus said, “Destroy this temple, and in three days I will raise it up.” They were baffled at this, but as we see in verse 21, “he was speaking about the temple of his body.”

Jesus dwelt—tabernacled—among them. He was the temple of God, the place of true and pure worship. And destroy him, they did. They cheered for his death (Luke 23:18-21). The death that would atone for the sins of all who believe in him, including some of the very ones who begged for him to be nailed to the cross (Acts 3:15). But three days later, just as he prophesied, Jesus rose from the grave, conquering sin and death, and becoming the sacrifice for sin once and for all (Hebrews 10:10). Colossians reminds us that “in him all the fullness of God was pleased to dwell.” (Colossians 1:19). And when Jesus ascended to heaven to sit on his throne, he sent his Spirit to dwell not just among us, but in our hearts.

Just as he was zealous for pure worship in the temple in Jerusalem that day, Jesus is zealous that the One True God would be worshipped rightly in our hearts, too. He’s jealous over his people (34:14). He refuses to share a table with our idols, our pet sins, or our false refuges. He says to us, “You shall not bow down to them or serve them, for I the Lord your God am a jealous God.” (Exodus 20:5).

And we see it’s impossible, don’t we? We try to worship God, but our elbows keep bumping into our pride. We try to focus on Jesus and obey him, but man it’s hard to see him with all this bitterness in the way. It’s too crowded. Something has to change. The clutter has to go. Lord, turn over the tables! Turn over the tables in my heart!

The Joy of Overturned Tables

The truth is, if we are in Christ, he has already cleansed us. He has declared us clean in him. Yet, Jesus is still at work in our hearts through his Spirit who sanctifies. We are cleansed, and being cleansed; made righteous, and growing in righteousness. What a gift. What a joy!

And it is a joy to have our tables overturned—to be convicted of our sin more and more and sanctified day by day. As Samuel Rutherford proclaimed, “They lose nothing who gain Christ.”

Do you have sin crowding your heart today? Join me in asking the Lord to turn over the tables of our hearts and cleanse us. Our bodies are a temple and he is zealous for us to glorify the One True God.

After writing this article, I discovered my friend and fellow creative Caroline Cobb, has a song on this very topic coming out Friday! You can find more information about her new song, “Turn the Tables” here.